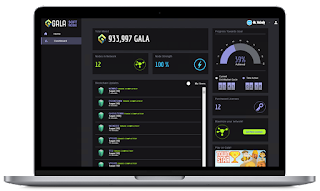 A Gala Soft Node supports the Gala network.  It is possible to buy a node licence to operate a personal Gala Node (or several).  Operators of nodes receive rewards for their contribution to the running of the network.  Rewards for running a node can include GALA tokens or Gala network in-game and collectible items (NFTs).
Unlike the energy intensive mining requirement of Bitcoin, a Gala Node can run on a quite low power system and is not required currently to even run 24/7 to receive network rewards.

The Gala network relies on users who operate Gala Nodes. By buying a licence to operate a node you also get a share of the rewards the network generates. In the form of NFTs (Non Fungible Tokens) these items can be used in game or sold. Rewards of Gala tokens can also be used within the Gala Network or traded on the growing number of exchanges that host Gala pairs